UPDATE – OCTOBER 2020 – Due to COVID issues causing problems with financing and building supply prices increasing substantially, this project has been cancelled. The property is back up for sale for development. You can contact the Winchester EDA for details.

Every few months Winchester hosts a community meeting with current Vice Mayor John Hill. This month’s meeting happened on June 8th and featured Shawn Hershberger of the Winchester Economic Development Authority (EDA) discussing current real estate projects being undertaken by the EDA. Two major projects were discussed, the furthest along being the plans for new apartments on East Piccadilly St by Providence Capital Partners, LLC out of McLean.

If you have followed the news there was some concern with tearing down several of the buildings due to their historic significance in Winchester but the citizens lost that battle when the City Council approved the planned demolition. There are a total of 6 buildings that will be torn down to complete the project, adding to the buildings that were demolished in 2015 where the current traffic circle now stands. So let’s take a look at what the area looks like now and what it is projected to look like at completion of the project.

This view from the traffic circle shows a parking garage on the first level with apartments above. The East Piccadilly Lofts will feature efficiencies, one bedroom and two bedroom apartments, with pricing somewhere between $1.70 and $1.80 per square foot. So for instance a 700 sf apartment would be between $1190-1260 a month. The developer plans on using VHDA financing so at least 20% of the apartments would be designated for lower income residents. With current apartment rentals in the downtown area ranging from $800-2400 the pricing is fairly competitive.

Although the building is in an area where designated parking is not required or encouraged, the developer desired having spaces for residents, so there are currently 44 spaces in the design, 2 of which are handicapped. The current drawings show 18 spaces under cover of the building and the rest located outside. If I remember correctly 47 apartments are planned, so street parking shouldn’t be affected too greatly. 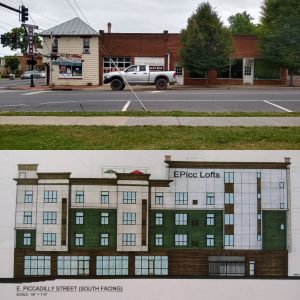 The Piccadilly St view shows a portion of the building designated for retail or commercial space on the first level. No pricing was discussed or how many units would be included, although I imagine the space will be flexible to accommodate interest as the project nears completion.

The drawings do not necessarily depict exact finishes, and there is discussion of community art project installations being incorporated honoring the residents that grew up in the area. Vice Mayor John Hill mentioned potential meetings to discuss ideas in the near future.

The abatement process is scheduled to start this week. This process will identify any issues that need to be mitigated during the demolition such as lead based paint and asbestos. If this goes according to schedule demolition is to begin in July so the foundation work can be completed before late fall to avoid weather delays. If this timeline can’t be met then building will likely begin in March of 2020.

The other project discussed briefly was the Towers site. In the very early stages I will post more about that soon! The next community meeting is scheduled for Aug 10 at Mt Carmel Baptist Church where the topic of discussion will be Winchester Zoning/Inspections.